St Fagans is one of the seven sites of the National Museum. In October of last year St Fagans celebrated the completion of the biggest period of change in its history. In 2012, it was awarded £11.5m from the National Lottery to begin the redevelopment of the Museum, the biggest grant ever to be awarded in Wales from the Heritage Lottery Fund. In addition, £7m was awarded from the Welsh Government to help transform the Museum. The remainder came from private donations including the Friends with the Friends supporting the project with donations since it started. In addition, the Friends received a substantial legacy during this period which was passed on to the Museum with an agreement that it would be used as part of the funds for the redevelopment.

St Fagans tells the story of the history and culture of Wales from earliest times and is one of Wales’s most popular attractions. The redevelopment involved the opening of new galleries and workshop spaces including iron age houses, royal residences and a new craft centre as well as a transformation of the reception area for visitors. The new galleries provide a much broader representation of the sweep of human history in Wales than before, from the first Neanderthal hunters to our contemporary multicultural society. The aim is to provide opportunities for critical thinking and the practice of skills. 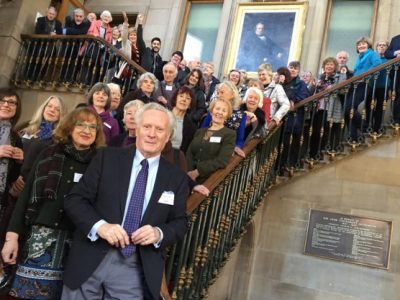